Device Developed at WashU May Allow Sensations in Prosthetic Hands 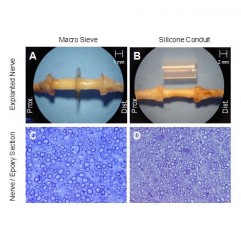 To the nearly 2 million people in the U.S. living with the loss of a limb, including U.S. military veterans, prosthetic devices provide restored mobility yet lack sensory feedback. A team of engineers and researchers at Washington University in St. Louis is working to change that so those with upper limb prosthetics can feel hot and cold and the sense of touch through their prosthetic hands.

Daniel Moran, PhD, professor of biomedical engineering in the School of Engineering & Applied Science and of neurobiology, of physical therapy and of neurological surgery at the School of Medicine, has received a three-year, nearly $1.9 million grant from the Defense Advanced Research Projects Agency (DARPA) to test a novel device his lab developed that would stimulate the nerves in the upper arm and forearm. If it works, upper-limb amputees who use motorized prosthetic devices would be able to feel various sensations through the prosthetic, which would send sensory signals to the brain.

DARPA is already funding the “Luke Arm,” a high-tech bionic limb created by DEKA Research. The prosthetic, named for “Star Wars” character Luke Skywalker, who received a prosthetic after losing his right hand in an epic battle with Darth Vader, is designed to help servicemen and women and veterans who had upper limb amputations. While the advanced prosthetic arm allows users to perform six different grips, such as picking up small objects, it does not provide users with the senses of touch and orientation of a natural hand. Moran, whose expertise is in motor neurophysiology and brain-computer interfaces, and his team have developed an electrode designed to stimulate sensory nerve cells in the ulnar and median nerves in the arms. The ulnar nerve, one of three main nerves in the forearm, is the largest nerve in the body unprotected by muscle or bone and is connected to the ring finger and pinkie finger on the hand. It’s the nerve that is stimulated when you hit your elbow on something and trigger your “funny bone.” The median nerve in the upper arm and shoulder is connected to the other fingers on the hand, so together, the two nerves control movement and sensations including touch, pressure, vibration, heat, cold and pain in all of the fingers.

People using arm prosthetics have to rely on their vision to use them properly, Moran says. To pick up a cup of coffee, they have to be able to see the cup, place the fingers of the prosthesis around it and lift it. They are unable to feel whether the cup is in their hand, if the cup is hot or cold or if they are about to drop it. By enabling the ability to feel, users will have more control over the prosthesis.

Moran and his team, which includes Harold Burton, PhD, professor of neurobiology; Wilson (Zach) Ray, MD, assistant professor of neurological surgery, both at the School of Medicine; and Matthew MacEwen, who will graduate with an MD/PhD in May 2015 and worked on this project for his dissertation, have developed a macro-sieve peripheral nerve interface designed to stimulate regeneration of the ulnar and median nerves to transmit information back into the central nervous system.

Ray will implant the device — which is made of an ultrathin, flexible material similar to a soft contact lens and is about 1/8th the size of a dime — into the forearms of anesthetized nonhuman primates. The research team will then determine the amount of sensory information that is encoded by providing low levels of stimulation to small groups of nerves. The device, which looks like a wagon wheel with open spaces between the “spokes,” allows the nerve to grow. Ray also will implant a small cuff electrode, the current standard of care, to compare the performance.

Once implanted, Moran and the team will train the nonhuman primates to play a joystick-controlled video game in which the team will give them cues as to where to move the joystick by stimulating specific sectors in the ulnar and median nerves so it feels as if someone is touching them, Moran said. Their reward for advancing through the various stages of the game successfully is fruit-flavored juice. “We want to determine what they can perceive through artificial stimulation of the nerves,” Moran says. “If we stimulate a particular sector of the nerve, that tells them to reach to a specific target. Using very low levels of stimulation (i.e. sensation), we want to figure out how many different nerve sectors we can independently encode with a unique target location.”

In particular, Moran and the team will analyze how many different independent channels they can stimulate on the nerve to determine how many sensors will work on the prosthetic hand. Using a method called current steering, they can move different amounts of current around the nerve to activate different sectors to connect the touch sensors on the hand to a different sector on the nerve. His team has already had success with this method in motor neurons in a rat model.

“If this works to stimulate motor neurons in muscles, we can certainly stimulate sensory neurons, and that’s never been done in a behavioral model in nonhuman primates,” Moran says.

Burton, an expert in sensory neurophysiology, will analyze how the brain processes the feedback from the nerve stimulation.

“The more real estate the brain uses, the more processing power and the more important something is,” Moran says. “The hand area in the somatosensory cortex is a big piece of brain, so there should be a lot of bandwidth. We think we’ll be able to send a lot of information to it.”

Moran and his team will work with DARPA to determine how many sensors to put on the prosthetic hands.

The School of Engineering & Applied Science at Washington University in St. Louis focuses intellectual efforts through a new convergence paradigm and builds on strengths, particularly as applied to medicine and health, energy and environment, entrepreneurship and security. With 91 tenured/tenure-track and 40 additional full-time faculty, 1,300 undergraduate students, more than 900 graduate students and more than 23,000 alumni, we are working to leverage our partnerships with academic and industry partners — across disciplines and across the world — to contribute to solving the greatest global challenges of the 21st century.