Legionnaires to walk the walk to honor their state's heroes 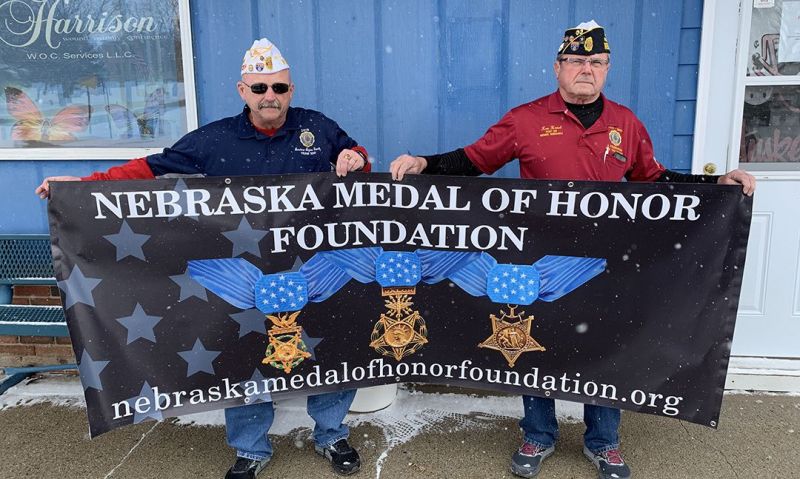 Now that the highway has been renamed, two members of American Legion Post 159 in Beemer, Neb., are planning to walk the entire stretch of highway to further honor the 73 Nebraska residents who have earned the Medal of Honor.

Ken Hanel and Daryl Harrison will start along U.S. 20 at Nebraska’s western border and traverse the 432 miles by alternating six-mile stretches. During the first stretch they will honor two Medal of Honor recipients from the state, while one recipient will be honored on each of the six-mile legs after that.

“Ken and I believe it’s up to us to show the rest of the state the proper way of paying homage to these Medal of Honor recipients from Nebraska,” said Harrison, Nebraska’s Area A Vice Commander. “That’s why we’re walking the walk.”

The journey will begin May 11 and end May 22 at Siouxland Freedom Park in South Sioux City, Neb. The goal is for the end of the journey to coincide with both the dedication of a Korean War memorial and American Legion National Commander Bill Oxford’s official visit to Nebraska. A flag that has been passed from state to state will be presented to Oxford following the last leg.

Along each six-mile segment, Hanel and Harrison will have hanging from around their necks a laminated biography of the Medal of Honor recipient they are honoring along that stretch.

“We have had some people ask to walk for a specific recipient,” Harrison said. “They can join us and walk alongside us so they can feel that they have done their due homage for that particular recipient.”

Hanel said the effort in Nebraska began with Past Department Commander Gene Twiford, who got letters of support from every community and county along the route. Hanel and Harrison came on board to assist Twiford, picking up political support needed to take the project before the Nebraska Department of Roads Commissioners.

Splitting up 36 miles a day over the course of 12 days is a big commitment. But Harrison didn’t have to look far for motivation. “All of you have to do is read the stories (of the Medal of Honor recipients),” he said. “You read those stories and you begin to become familiar with what these men sacrificed and what they went through. This is the least Ken and I can do.”

“This is a not a drive through town, honk the horn, make a U-turn, go on to the next (town) and be done in three days. This is something personally that I want to do.”

The Nebraska Medal of Honor Foundation, of which Harrison is the president, is hoping to place six signs along the stretch of highway: one entering the state from both the east and west, two at the crossroads of the American Legion Memorial Highway in O’Neil and two at the crossroads of the Veterans of Foreign Wars Memorial Highway. For more information about the walk and the signs, click here.