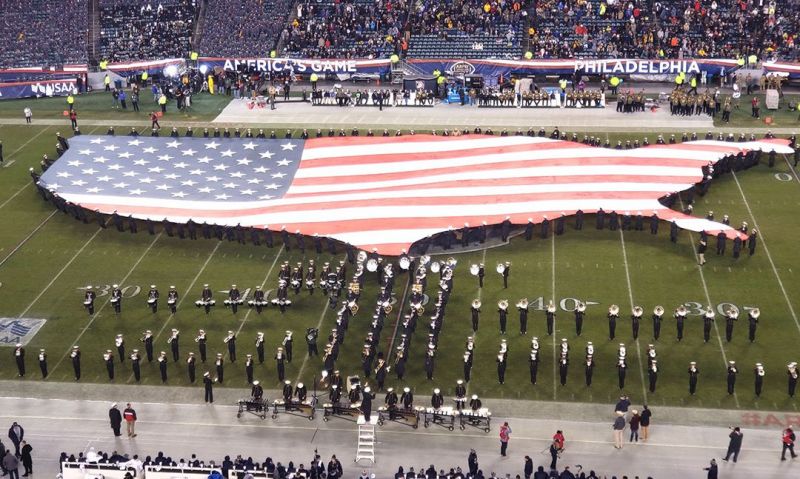 Not only did Navy senior quarterback Malcolm Perry rush for more than 300 yards in Saturday’s victory over Army, he achieved his primary goal.

“It means the world; it was my biggest goal,” Perry said after the 31-7 win that broke a three-year losing streak in the annual rivalry game. In an extraordinary performance that will long be remembered, Perry ran for 304 yards and two touchdowns in the 120th Army-Navy game.

Traditions of the Army-Navy game abound starting with game balls run by marathon teams from each academy to the stadium, tug of war and obstacle course competitions, the “Prisoner Exchange” of exchange students from each academy. The night before the game thousands of alumni of both schools gather for a gala dinner while on game day thousands of tailgate parties reunite families, graduates and veterans.

Army got off to a strong start as backup quarterback Christian Anderson led an 18-play, 78-yard drive, which led to the first score. On the drive, Anderson ran 11 times for 43 yards, including the touchdown that put Army up 7-0.

Navy responded quickly with a 55-yard touchdown run by Perry.

Perry took the snap, then handed the ball to wide receiver Chance Warren, who faked a reverse, then threw Navy's only pass of the game, a perfect spiral over Army defenders. Sophomore fullback Jamale Carothers hauled it in for the go-ahead score.

Navy wore down Army with its running attack, eventually taking a 21-7 lead with 4:53 left in the third quarter. After a field goal, Perry closed the scoring with a 15-yard run.

In addition to advancing its record to 10-2, Navy won the coveted Commander in Chief Trophy and will receive an invitation to visit the White House. They will play Kansas State in the Liberty Bowl on Dec. 31.

Ken Kraetzer reports for Sons of the American Legion Radio and is a member of Squadron 135 in White Plains, N.Y.