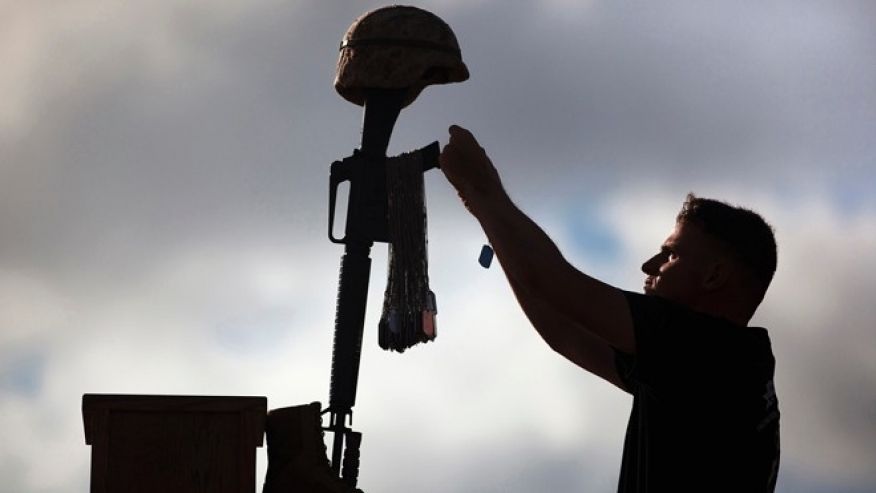 A planned monument that would serve as the final piece of a veterans’ memorial in a Detroit suburb has caused controversy over its prominent depiction of a military rifle, the Detroit Free Press reported.

Bear Hall, the chairman of the local chapter of Friends of American Veterans in Milford, Mich. earlier this month proposed placing a sculpture of the battlefield cross at the end of a brick walkway leading out of the present veterans’ memorial.

The battlefield cross-- a military helmet adorned with dog tags perched on the stock of an automatic rifle, its barrel pointing downward into a pair of combat boots --has been used by those in active duty as far back as the Civil War to memorialize fallen soldiers.

Hall told the Free Press he approached the village council’s parks and recreation commission about adding the just-over four-foot sculpture of the battlefield cross on a four-foot base. He said was told by some council members that the icon might not be appropriate as a centerpiece for the park.

"There was some concern from a couple of members regarding the specific memorial that’s proposed. Specifically, the gun," Milford Village Manager Christian Wuerth told the Free Press, "They understood the history and meaning of it; they just didn’t feel it was appropriate for that specific location."

"Being a veteran, I want to see a monument there, yes," Councilman Tom Nader said, according to the Free Press, "I just don’t think this is the proper one."