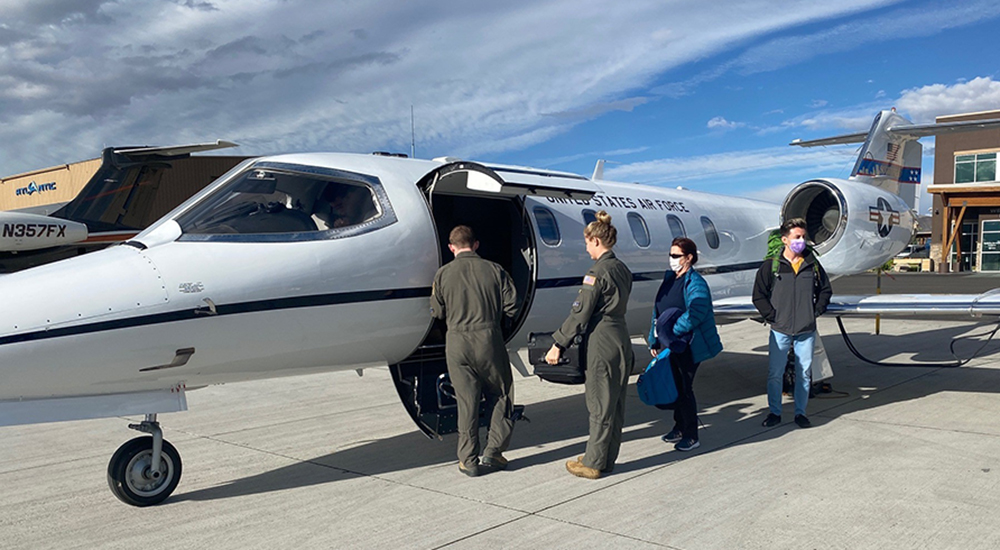 Recently, I had the honor of sitting with five Licensed Practical Nurses (LPNs) from VA Sierra Nevada Health Care System in a quiet private airport in Reno, Nevada. We were waiting for their jet, courtesy of the U.S. Air Force, to arrive and whisk these heroes away to New Jersey. They were on their way to provide relief to the weary practitioners fighting the pandemic.

These LPNs volunteered to go to New Jersey to assist medical staff in nursing homes, where staff has been stretched to the breaking point caring for their high-risk senior population.

As I sat with them, I realized that I had an honest admiration not only for these five individuals, but also for my entire VA health care team.

Nurses on their way to help in New Jersey.

Not one of them expressed regret with their decision to volunteer. Each would be working nonstop, 12-hour shifts (maybe longer) with complete strangers, caring for senior citizens on the East Coast. They spoke with compassion and used phrases like, “This is what I was born to do.”

We need nurses now more than ever

One even stated she has no family here in Nevada and if requested to extend her short tour in New Jersey, she gladly would. She said she hoped she would inspire someone to consider a career in health care. “We need more nurses,” she said, “now more than ever.”

The small Air Force C-21 jet arrived and three young crew members stepped down onto the tarmac. Through the waiting lounge window, the six of us made comments about the crew’s appearance in their military issued olive green flight suits.

We started making Top Gun references. “That one looks like Maverick,” said one. “If there’s a Goose, we are screwed!” said another. We all burst into laughter, which increased even more as the three young service members entered the airport with looks of bewilderment at our good humor. Their faces quickly transformed into comforting smiles. They understood that this moment was necessary.

The pilot assured everyone that once the plane is fueled, loaded, and pre-flight checks done, they would be on their way. The flight crew graciously humored me with pictures of them with our nurses and the plane.

I assisted with loading the LPN’s bags onto the jet and bid everyone a safe journey. I remained in the small airport to watch through the window until the wheels were off the ground.

“God speed and safe travels,” I said aloud. I heard an “Amen” from behind me and turned to see a baggage handler had come to watch as well.

To the nurse who claimed to have no family here in Nevada, I beg to differ. You have VA. Together we are strong, and together we are a family.

Shane Whitecloud is a Navy Veteran and a public affairs officer with the VA Sierra Nevada Health Care System.