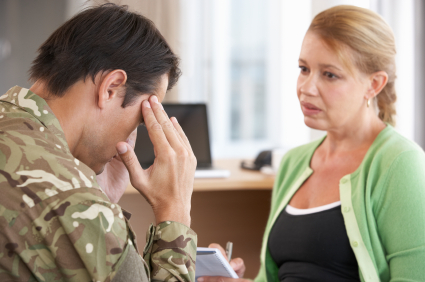 A new study by a Brigham Young University professor has found that combat veterans' first marriages are 62 percent more likely to end in separation or divorce than other men's, a fact he hopes will be considered by defense policy-makers.

"We found that combat experience is an important risk factor for divorce or separation," said Sven Wilson, an assistant professor of political science, whose study is reported in the new issue of the academic journal "Armed Forces & Society." "Traumatic experiences like combat seem to have a persistent impact on the ability of people to form and maintain successful relationships."

Wilson and his fellow researchers compared divorce and separation rates between veterans who had seen combat and those who had not. The study analyzed the results of men's marriages throughout most of the past century, including before, during and after World War II, the Korean War and the Vietnam War.

Wilson called for more research and for government officials to take a closer look at the total effect war has on the families of veterans.

"The impact of war and military service on families of veterans is relatively understudied. A portion of these costs fall not just upon the men and women who serve, but upon those who stay home," Wilson said. "Do members of the military and their spouses need special counseling? Does the military need to more closely monitor what's going on in families? What kinds of support do veterans and their spouses need after their service ends? These are some issues that need to be added to the equation. We just don't know that much about them."

Wilson used information from the National Survey of Families and Households, a nationwide study of more than 13,000 individuals conducted in the early 1990s. Using a statistical method called duration analysis, Wilson and his team examined the relationship between military service and men's first marriages, controlling for year and age at marriage, religion, socioeconomic status, education and other social variables.

Surprisingly, marital dissolution rates are highest for Korean War veterans, not for Vietnam veterans as is commonly thought. The findings indicate that Vietnam veterans were 28 percent more likely to divorce than non-veterans from the same time period, but Korean War vets were 45 percent more likely to divorce over the subsequent 10 years than were non-veterans in their era.

"There is a notion that Korea was much like World War II, but that Vietnam really messed people up," Wilson said. "We find quite the opposite. It's true that Vietnam vets were getting divorced at high rates, but so was everyone else at the time. We suspect that people often ignore general social trends when thinking about the effects of the Vietnam War."

Veterans who married following the Korean and Vietnam Wars had significantly higher rates of marital dissolution when compared to non-veterans and World War II veterans.

"After controlling for things like combat, age and religion, the effect of serving in Korea was more than twice as high as it was in World War II. There was a real sea change between World War II and Korea," Wilson said.

Wilson says the results need to be interpreted in light of overall trends in marriage stability.

"Starting in the '60s and continuing through the early '80s there was an unraveling of marriage and the social fabric in general," Wilson said. "For veterans it looks like this started much earlier than we would have anticipated."