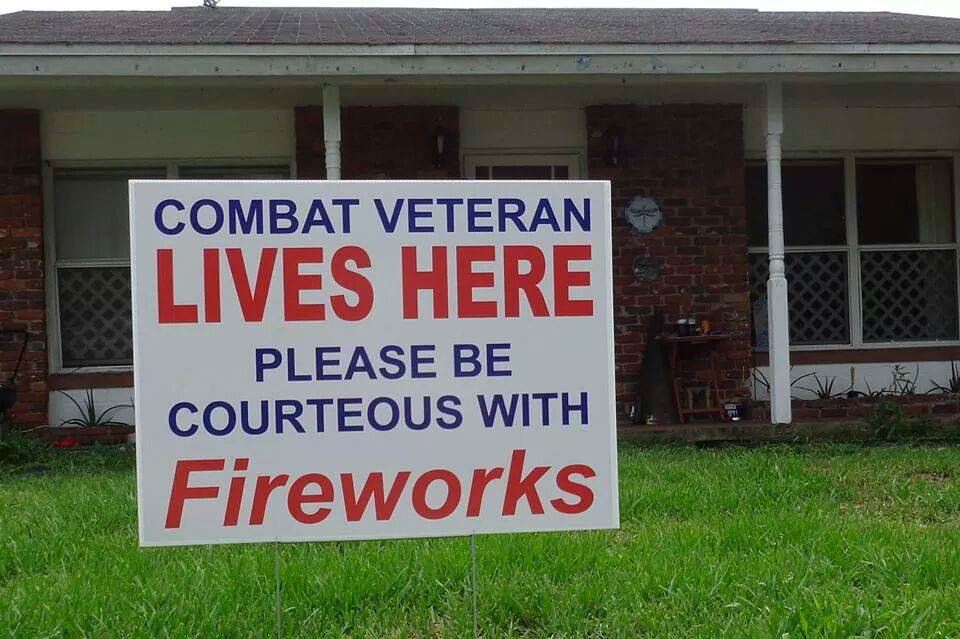 In case you did not know Kevin Haynes was once in the military, then you will probably realize this when you spot the figure the two flags that are always flying from his front porch: one is an American flag while the other is a U.S. Marine Corps flag. The flags tell the story of a veteran who still appreciates his days in the military. The story which is not narrated by the flags is that of a 33 year old ex-soldier who was once a High Point man. The man who is not just a veteran, but a combat veteran suffering from post-traumatic stress disorder, or (PTSD). On front yard of his home, where is he lives with his wife there is a sign "Combat Veteran Lives Here,"  "Please Be Courteous with Fireworks." The sign which is red, white and blue in color stands as reminder of Haynes condition on the compound of his home on W. Westwood Avenue. The sign is supposed to remind their neighbors and any passers-by that on the 4th of July, the day can be a difficult holiday for veterans suffering from PTSD.

As Haynes says the sign is not meant to hinder any one from celebrating the holiday but then it’s intended to make sure that the neighbors know that as they celebrate the day, there are veterans out there who have PTSD and the fireworks might trigger them.

Kevin and his wife Jennifer try to encourage those with neighbors with PTSD not to set off any fireworks without first notifying the veteran about when and where you plan to set off the fireworks. Apart from that they discourage the setting off of fireworks at odd hours, like late at night.

The loud and unexpected noises like the sounds got from fireworks are very common triggers for many combat veterans who are suffering from PTSD, this is because the noises tends to remind them of gunfire or explosions that they experienced on the battlefield.

This is the case that affects many veterans with the condition like Haynes. Haynes served in the Marine from 2003 to 2013, and during that time he made 3 tours of duty (one in Iraq and two in Afghanistan). Haynes who was a combat engineer, and he specialized in areas like demolitions, explosives and land-mine warfare.

Kevin learned about the sign, "Combat Veteran Lives Here", from a fellow veteran who also suffers from PTSD. He then immediately went to the sign-maker's website, www.militarywithptsd.org, and ordered one for himself.

The idea behind the whole sign thing is not to limit anyone's holiday fun, but rather to raise awareness of PTSD and the impact it has on veterans.