When veterans enroll at elite schools, they’re not just students 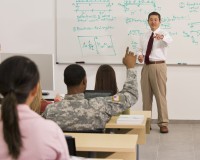 GWEN IFILL: Now: offering higher education to those who have served.

Many Americans join the military right out of high school. And once they return, some colleges are now giving them a chance to learn at the country’s top-tier schools.

JACKIE JUDD: This was the classroom that taught Nicole Leadenham the lessons of war during deployments in Iraq and Afghanistan.

NICOLE LEADENHAM, Army Veteran: I left for basic training 10 hours after I graduated high school. So that was going to be what I was going to do.

NICOLE LEADENHAM: I think that this is the time that I was meant to be here, at this stage in my life. I can really take advantage of the academics and, you know, learning.

JACKIE JUDD: Leadenham, a junior and one of 30 post-9/11 vets at Vassar, is here because president Catharine Hill wanted to somehow close the education gap between young people who go off to elite campuses like this one and those who enlist and go off to fight the wars.

CATHARINE BOND HILL, President, Vassar College: More of the young men and women who are enlisting are coming from lower socioeconomic backgrounds. And it just seems to me that part of the reward or the return for doing that is that they get access to education when they come back.

JACKIE JUDD: Did you feel that this grateful nation notion, was it words and not action?

CATHARINE BOND HILL: I think the evidence absolutely suggested that it was words and not action.

JACKIE JUDD: The Veterans Administration says more than one million vets are using G.I. benefits. Most attend public or for-profit schools. The number at top-tier colleges and universities is so small, it is not even known.

A few years back, Vassar invested in a campaign to attract veterans to apply. None did, even though their education would have been fully paid for. So, the college turned to the Posse Foundation, which is expert at reaching nontraditional students.

For 25 years, it’s been sending groups, or posses, of students to elite colleges, students with academic and leadership potential who don’t fit the mold.

DEBBIE BIAL, The Posse Foundation: Posse is about helping the top colleges and universities think about how to build a diverse student body, how to get as rich a dialogue going on campus as they possibly can, how to create community and build bridges across the various communities on campus. It made sense to us to include a piece of our population that served the country.

MICHAEL SMITH, Posse Student, Wesleyan University: I think it’s going to allow for the trajectory of my life to be more vertical, by virtue of being here.

JACKIE JUDD: Posse veteran Michael Smith, who grew up on Chicago’s South Side, is a sophomore at Wesleyan University in Middletown, Connecticut. That school joined the program two years ago.

JACKIE JUDD: Before arriving on campus, the veterans go through a kind of boot camp in New York City. It is four weeks of preparing for rigorous academics, learning how to craft a college term paper, and team-building, so the veterans know that, once they get here, they have a circle of support if they need it.

But there are still hurdles. Leadenham needed to brush up on some old, forgotten skills.

NICOLE LEADENHAM: I had problems with knowing how to study. It’s a very tangible skill that I didn’t have anymore, and I couldn’t even remember how I had done it before. So, I had gone to my professors’ office hours, stuff like that, being like, how can I better absorb the material?

JACKIE JUDD: Another Vassar vet, Eduardo De La Torre, lives off campus with his young family. As the leader of a first-responder medical unit in Iraq, he frequently faced life-and-death situations. With that past experience and his current family obligations, he admits that mixing with other younger students can be awkward.

EDUARDO DE LA TORRE, Posse Student, Vassar College: They’re like, yes, we’re going to do a study group today. I will text you later. And the next thing you know, you’re getting a text at midnight: “Hey, we’re going to go meet up at the retreat to go study for like an hour over this.”

So, it’s been difficult building relationships with the students.

JACKIE JUDD: Wesleyan sophomore Bryan Stascavage found himself in the middle of a full-throated culture clash on the very liberal campus.

Stascavage, an Iraq War veteran and a conservative, was vilified after writing a column for the college newspaper critical of Black Lives Matter.

BRYAN STASCAVAGE, Posse Student, Wesleyan University: The veterans that live here at the house with me looked at me wide-eyed like, what did you do, what did you write?

And I knew that the articles that I were writing were not the prevailing opinion on campus. And I knew that it was only a matter of time when, I like to say that I connect with a beehive.

MICHAEL ROTH, President, Wesleyan University: Unlike a fighting unit, where you really need cohesion and you all have to point in the same direction, at a university, you can afford dissent and controversy, as long as you learn to listen while that’s going on.

JACKIE JUDD: Though difficult in the moment, Wesleyan president Michael Roth says the episode ultimately was good for the community.

BRYAN STASCAVAGE: I don’t want to be in an environment where everybody thinks the same as me, because you just don’t learn that way.

EDUARDO DE LA TORRE: I think the military is stereotypically seen as something very conservative, and being in a very liberal campus, you can feel shut off, and you can feel like my voice isn’t going to be accepted here, and it’s not going to be heard.

JACKIE JUDD: Still, many of the younger, more traditional students clearly appreciate being exposed to the experience and world view of their ex-military classmates.

MAGGIE KENNEDY, Studen, Vassar College: I think it’s great because it gives a lot of different perspectives, especially at a liberal school, where a lot of people maybe not pro-military, per se.

YANIV YAFFE, Student, Vassar College: It’s easy to in a class criticize American foreign policy, for example. You know, we’re so distant from things like Iraq and Afghanistan, but when you have a soldier who has been there, it really changes the conversation.

JACKIE JUDD: A thousand veterans applied to Posse for the 30 slots in the next freshman class, which, along with Wesleyan and Vassar, will include Dartmouth College in New Hampshire.

Posse’s Debbie Bial expects that, in five years, about a dozen private liberal arts colleges will be a part of the program, giving other vets opportunities they never would have imagined, while also bringing their hard-won perspective to campuses previously shut off to military culture. The veterans also say the program has something to teach the entire country.

NICOLE LEADENHAM: We’re capable of more than what we have been pigeonholed into. So, I think it’s important to know that we’re not just these broken people coming back, incapable of succeeding within society.

JACKIE JUDD: A Vassar education has given Leadenham the confidence to plan for a future that includes helping other veterans find their own way back from the war.

Credit > For the “PBS NewsHour,” this is Jackie Judd in Poughkeepsie, New York.